“Intangible cultural heritage (ICH), transmitted from generation to generation, is constantly recreated by communities and groups… and provides them with a sense of identity and continuity, thus promoting respect for cultural diversity and creativity.” UNESCO ICH Convention.

It is true for Samoa, Pacific island country, where I have had privilege to meet amazing people, dedicated to preserve traditional craftsmanship, knowledge and practices.

One of them is Galumalemana Steven Percival, filmmaker, artist, initiator of various cultural projects and events. I was impressed by his film about sennit, strong and versatile cord, made from coconut tree fibre, which has significant cultural and utilitarian value to Samoans.

So I decided to participate as a photographer in his new research into the making and use of Samoan stone adzes as ancient building and carving tool. Main aim of the project is generating greater understanding and appreciation of this ancient technology, that has shaped much of the Samoan culture and way of life. But even more, Samoan bluestone adzes, made from hard oceanic basalt were found on other Pacific islands as Tonga, Fiji. Apparently, Samoan craftsmen tools was widely used through Pacific in ancient times.

Stone adzes can be found in old settlements, at quarries, where they  initially were made, and even around river sharpening stones. Most of them are currently held in private collections, as in the image below.

Starting point was to shape the stone adze on the grindstone and lash it to carved handle – to resemble ancient technology of producing of basic building tools.

Part of the research – assessment of stone adzes private collections. Dedicated team visited large estate of Richard and Suela Cook in Malaefono, Saleimoa, North-West coast of Upolu island. Here large collection of adzes have been found on the property by the owners. It includes variety of adzes- large, mid-sized and smaller one.

It was an amazing feeling – just imagine ancient Samoan people, producing almost everything- houses, canoes, weapons – by using those adzes. 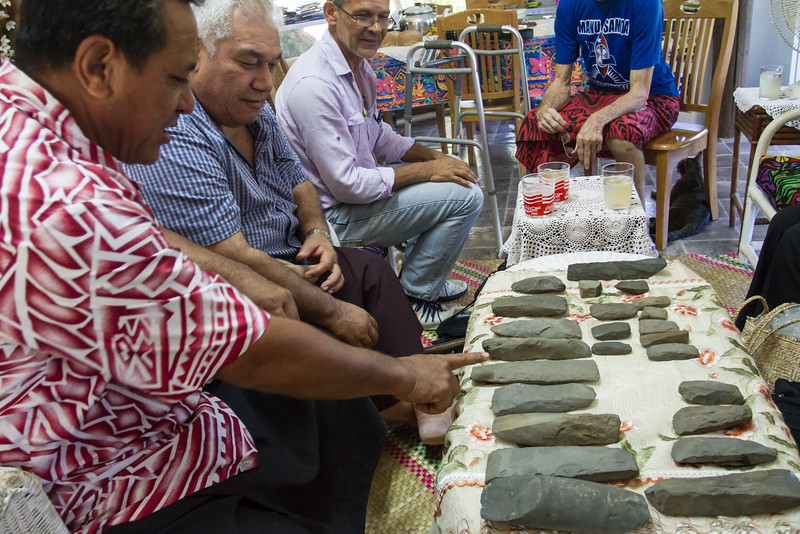 We collected some bluestone samples at the quarry in their estate.

Some tries were made to sharpen an adze in the traditional way - by circular grinding action, which gradually produce shallow cavities on the stone surface.

Some investigation resulted in search for another real sharpening stone near stream in Moamoa-fou, a new residential area close to Apia, capital of Samoa.

After the inspection of several stream beds, we eventually found the rock with the assistance of Dick Nansen, a resident in the area who fishes the stream (when it is running).

The project is going on – new places to visit, new investigation and discoveries, but unfortunately - without my participation.

Samoa is a country of great natural beauty and unique culture. But its real treasure is Samoans themselves.